The management of construction and demolition noise in and around an operational courts facility provides a unique challenge.

However Senior Acoustic Engineer Tracy Hilliker describes how the team enjoys this type of challenge – “Like many buildings in central Christchurch, the High Court building experienced significant water ingress into the basement during the earthquake events. Portions of the building were to be demolished – however the majority of Court Rooms were relatively undamaged, and Ministry of Justice needed to keep using these spaces, given how many other Court facilities in the region were unusable”.

The proposed methodology for dewatering and waterproofing the basement required sheet piling around the entire building perimeter – all while Judges (accustomed to being able to control every aspect of the Court Room) continued to hear cases. Night time work was also considered – however sleep disturbance effects for neighbouring central city residences then also needed to be addressed.

AES undertook detailed noise and vibration analysis to determine which areas of the building would be most affected, and developed mitigation and management strategies to allow as many of the Court Rooms to continue to be used as possible. Expected levels received offsite were also calculated, and strategies developed to enable work to be carried out for as much time as possible, without exposing neighbours to unreasonable noise.

AES were also responsible for the acoustic design of the temporary courthouse constructed on Cambridge Terrace, and were called in to help address acoustic issues which arose when the Nga Hau e Wha Marae on Pages Road was also temporarily used as a Court Room.

Posted in | Comments Off on Christchurch High Court – Sheet piling

With hundreds of unique noise sources and covering a total area of more than 10 acres, Niagara Sawmill  in Invercargill is a significant industrial operation.

The challenges of understanding and managing noise from such a complex source are considerable, as Project Acoustic Engineer William Reeve explains – “At any given location on or off the site the noise you hear will be a combination of many sources – loaders, saws, processing and finishing equipment and extraction systems. The noise levels and sources also change over time, and some are very large with multiple noise generating components”.

To assist the sawmill with understanding their noise emissions William and the team undertook extensive site survey work, which was used to gradually build up a model of the entire site. The model was calibrated through further site measurements. This then allowed the contribution of each source to noise at any location to be studied, and noise reduction strategies formulated. However, in keeping with the overall scale of the project, some of the mitigation measures needed to be very large to be effective – including the bund / fence pictured above.

To date this ongoing project has seen some great successes, with a noise reduction of over 15 dBA achieved for some neighbours.

Posted in | Comments Off on Niagara Sawmill, Invercargill

With locations including Lake Coleridge, Highbank, Montalto and The Cobb in Takaka, this work has taken the team off the beaten track – with plenty of opportunities to meet the locals. 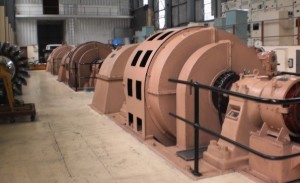 In line with AS/NZS 1269.3:2005, responsible employers regularly review operating procedures with regard to occupational noise management.  Power stations contain a wide variety of areas and noise sources, all of which must be inspected and quantified. Noise levels may exceed 95 dBA in the machine hall and in workshop areas, and be much lower in control rooms and office areas.  Occupational noise management strategies were therefore required  to  ensure  workers  moving  into  each  area  wear  the appropriate  hearing  protectors.  Care  was also taken to  ensure  staff  avoided  wearing hearing protectors with a much higher attenuation than required for a particular area, as over protection  may  lead  to  a  sense  of  isolation  and  difficulties  with  the  perception  of  useful sounds.

The outcome of the analysis typically involved a high class of hearing protectors being required during specific high noise tasks (compressed air stations, welding bay and the like) and  within  the  open  plan  machinery  hall  during  times  of  peak  activity.    Methods for the on-site marking of these excessive noise areas have been implemented, and management procedures as part of the site induction process are in place to educate workers.